Mirabai Ceiba is a duo: guitarist / singer Markus Sieber and singer / harpist / pianist Angelika Baumbach. They come from different parts of the world. Markus is from East Germany. Angelika was born in Tucson, Arizona and grew up in a small village near Mexico City.

Markus and Angelika met for the first time at a street fair in Edinburgh, Scotland and quickly fell in love. Markus had a successful acting career at the time, and Angelika traveled the world as a singer / songwriter. The newly formed couple decided to share their love with the world through uplifting music fully immersed in spirituality, passion and beauty.

Together, they created a new musical style combining the Gurmukhi mantras from the Kundalini yoga tradition with original songs in English and Spanish that reflect the influence of Native Americans and also draw words of wisdom from Rumi, Thich Nhat Hanh, Guru Nanak and Yogi Bhajan.

Through their recordings, they combine elements from these different influences and sources. And that's what gives their music strength and uniqueness, why it sounds like a gift from space.

At their concerts, they transport listeners directly into a state of awakening of their inner healing, rejuvenating power and source of their deep emotional power.

Their music stems from pure love and devotion. She is calming, calm and very meditative. 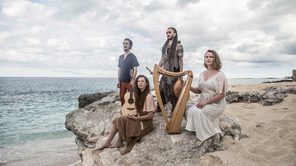